One of Orgasmatronics sexy creations is the Orgasmatron. Currently in its second iteration, the Oragasmatron X2 is essentially a hand held sex machine.

We have talked about Orgasmatronics before. They created the Ambrosia Vibe which we have reviewed previously, this ‘bionic-strap on’ is easily the most innovative sex toy we own.

Dr. X used to work in a science lab while secretly longing for something more exciting. Something with less pants. The story goes that Dr. X’s wife presented him with a challenge “Build me a sex machine?”. And the the Orgasmatron was born.

“Well what good does a large gyrating light bulb do me?” I hear you asking. Once I come to grips with the odd reality where I can ‘hear’ you asking questions through my blog, I respond with “Well the Orgasmatron X2 offers many attachments for transmitting these gyrations to your sensitive spots”

Lilly and I also own an Orgasmatron X1 that we have used extensively. In form and function the X1 is nearly Identical to the X2, only the Orgasmatron X2 features the following welcomed improvements:

Anything But Plane Jane

Note: X1 attachments will work on an X2 but they will not stay on as firmly and may precess.

Life Of The Party

The Orgasmatron X2 is a toy we bring to all of our social Kink and Swinging events. It livens up any sex-positive gathering and there is usually a line of willing participants that want to try it out. The toy is unique and draws a crowd, in no small part because of the noise. As mentioned earlier, the Orgasmatron X2 is marginally quieter than it’s predecessor, but don’t expect a simple door to shield the noise from your gyrating love session. The attachments are colorful, soft to the touch, and a ton of fun to try in different ways. So if you are looking for a sex machine that can fit your purse AND your wallet you should give the Orgasmatron X2 a spin. Or a gyration, as the case may be.

From now until Cyber Monday, pick up the Orgasmatron X2 for $50 off! 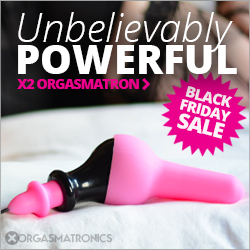